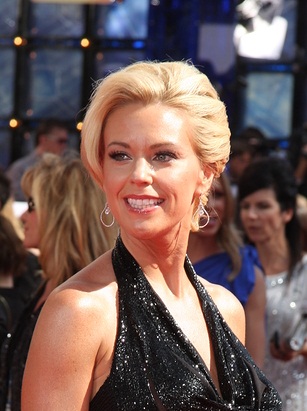 Gosselin in 2010, photo by kathclick/Bigstock.com

Kate Gosselin is an American television personality. She is known for appearing on the reality series Jon & Kate Plus 8, with her then-husband, Jon Gosselin, and their eight children.

Kate is of German, English, and Scottish descent. Much of Kate’s family is from the Pennsylvania Dutch, ethnic Germans in Pennsylvania, community.

There were some claims on the internet that Kate’s mother is Jewish. This is not correct.

Kate’s paternal grandfather was Clair E. Kreider (the son of Franklin/Frank B. Kreider and Edith C. Bricker). Kate’s grandfather Clair was born in Pennsylvania. Franklin was the son of Gottlieb/Gilbert Kreider and Matilda Douple/Doupple. Kate’s great-grandmother Edith was the daughter of Samuel A. Bricker and Ellen S. Coley/Caley.

Kate’s paternal grandmother was Edythe Irene Robinson (the daughter of John Franklin Robinson and Icy/Icie Lura Burgess). Edythe was born in West Virginia. John was the son of John Thomas Robinson and Mary Elizabeth “Lizzie” Kersey. Icy was the daughter of The Rev. John Newton Burgess and Nancy Catherine Martin.

Kate’s maternal grandfather was Arthur A. Kolak (the son of Willhelm/William Kolak and Henrietta Boettcher). Arthur was born in Pennsylvania, to German parents. Wilhelm was the son of Gottlieb Kolak and Gottliebe Opalka.

Genealogies of Kate Gosselin (focusing on her father’s side) – http://worldconnect.rootsweb.ancestry.com
http://records.ancestry.com

Genealogy of Kate Gosselin (focusing on her mother’s side) – http://worldconnect.rootsweb.ancestry.com