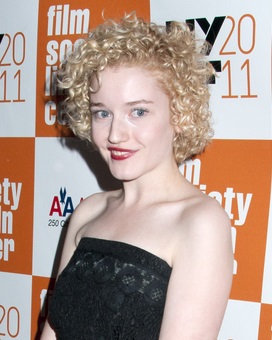 Julia Garner is an American actress. Her roles include the films Martha Marcy May Marlene, Electrick Children, We Are What We Are, Sin City: A Dame to Kill For, Grandma, and Good Kids, and the shows The Americans, Dirty John, Ozark, and Inventing Anna.

Her father, Thomas Garner, an artist, has English, Cornish, Scottish, Irish, German, and Scots-Irish/Northern Irish ancestry. Her mother, Tami Gingold, is Israeli, and was a well-known comedian there; she is of German Jewish and Polish Jewish descent. Julia has referred to herself as Jewish.

Julia is married to musician Mark Foster. Mark is the singer, guitarist, and keyboardist of the band Foster the People.

Julia’s paternal grandfather was James Parent Garner (the son of Harrison Levi Garner and Mary Parent). James was born in Wisconsin, and was a prominent lawyer. Harrison was the son of Levi Garner and Sarah Ann McMahan/McMahon, whose parents were from Northern Ireland/Ireland. Mary was the daughter of Frederick/Fred Pearent/Parent and Augusta Olbrich/Olbrish, who was of German descent.

Julia’s maternal grandfather was named Zeev Gingold. Zeev was born in Berlin, Germany. He was Jewish, and moved to Israel.

Julia’s maternal grandmother is also a German Jew, and is the daughter of Wilhelm/Willi Neisser and Rosa Friedmann. Wilhelm was born in Katscher, Gmina Kietrz, Oppeln, Oberschlesien, Poland, the son of Carl Kalonimus Neisser and Marie Miryam Poppelauer. Rosa was born in Ostrowo.

Genealogy of Julia Garner (focusing on her mother’s side) – https://www.geni.com