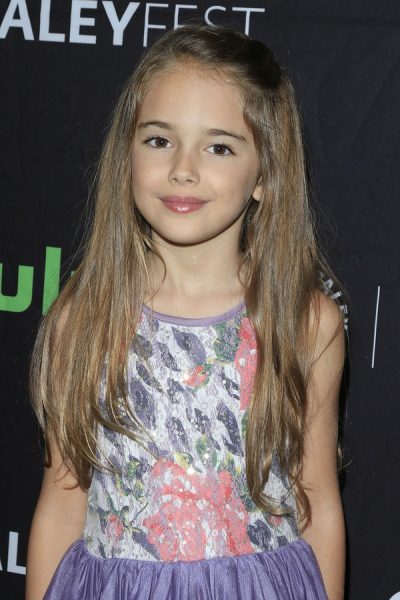 Butters in 2016, photo by kathclick/www.bigstockphoto.com/

Julia Butters is an American actress. She is known for her role as Trudi Fraser in the film Once Upon a Time… in Hollywood. Her father, Darrin Butters, is a Disney animator, and is from Kearney, Nebraska.

Julia’s paternal grandfather is Thomas E. “Tom” Butters (the son of Mathieu Earl Butters and Mary Ellen Shigley). Mathieu was born in Colorado, the son of Edgar R. Butters, whose family was from Maine, and of Leona Mathieu, who had French heritage. Julia’s great-grandmother Mary Ellen was born in Nebraska, the daughter of Arthur Chester “Art” Shigley and Anna/Ann Bower. She had German ancestry.

Julia’s paternal grandmother is Velda Rae Whitefoot (the daughter of Eugene “Gene” Whitefoot and Alma Rosella Pritschau). Eugene was the son of Henry Arthur Whitefoot, who was of German descent, and of Grace Agnes Margaret Christensen, whose grandparents were all Danish. Alma was the daughter of Leo Pritschau, whose father and maternal grandparents were German, and of Bertha Viola Russell.

Julia’s maternal grandfather is Jon Miriam Hill (the son of Floyd Oliver Hill and Joyce Ann/Annie Stevenson). Jon was born in California. Floyd was born in Oklahoma, the son of Edgar Olliver “Ed” Hill and Jessie Lugena Tubb. Joyce was born in Texas, the daughter of Jesse Lenford Stevenson and Mathilda A. Behrens, whose parents were German, with her father having been from Hanover.

Julia’s maternal grandmother is Trudy Ann Leyrer (the daughter of Rudi Mehl/Rudy Leyrer and Dorothy Junaretta Spaulding/Spalding). Rudy was born in Karlsruhe, Stadtkreis Karlsruhe, Baden-Württemberg, Germany, and moved to the U.S. in 1936. He was the son of Wendelin “Wenne” Braun and Emma Frieda Mehl. Dorothy was born in Michigan, the daughter of Raymond DeLos Spaulding/Spalding and Ida May Sloan.