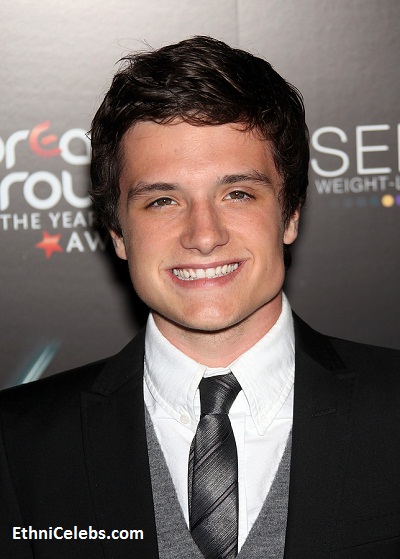 Hutcherson in 2010, image via DFree/Bigstock

Josh Hutcherson is an American actor, director, and producer. He has starred in the films Zathura, Bridge to Terabithia, The Kids Are Allright, and The Hunger Games, among many others. He is the son of Michelle (Fightmaster) and Christopher Hutcherson. His brother, Connor Hutcherson, has also acted.

Much of his ancestry is English, with some Scottish and Scots-Irish/Northern Irish. His mother’s maiden name, Fightmaster, is an English transcription of the identically-pronounced German surname Veith, and Josh has fairly distant German ancestry from that line, as well as some other German ancestry on both sides of his family. Josh also has remote Irish and French ancestry. Most of his recent forebears have lived in the American South for many generations, especially in Kentucky. He is descended from many soldiers in the American Revolutionary War.

Josh’s paternal grandmother is Donna Sue Kearns (the daughter of Charles William “Bobby” Kearns and Doris B. Chipman). Donna was born in Kentucky. Charles was the son of Thomas Henry Kearns and Virginia/Virgie Wright. Doris was the daughter of Omer Sales Chipman and Anna Belle Mulllins.

Josh’s maternal grandfather is William Michael Fightmaster (the son of Jack Donald Fightmaster and Helen Marie Donaldson). William was born in Kentucky. Jack was the son of John Weber Lee Fightmaster and Garnet F. Ramsey. Helen was the daughter of James Millard Donaldson and Julia May Hedrick.