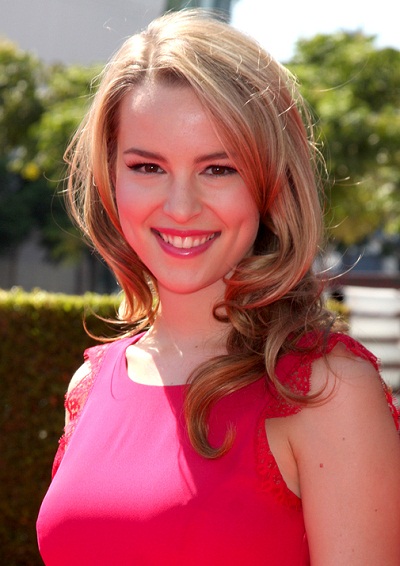 Mendler in 2012, photo by kathclick/Bigstock.com

Bridgit Mendler is an American actress, singer, and songwriter.

She was born in Washington, D.C., and relocated with her family to San Francisco, California, as a young child. She is a niece, by marriage, of psychologist Christine Blasey Ford.

Bridgit’s paternal grandmother is Anne Raeder (the daughter of Oscar Jacob Raeder and Mildred Munro Woodsum). Oscar was of German descent, the son of Oscar W. Raeder and Augusta Wetzel, whose father was from Darmstadt, Darmstadt, Hesse and mother was from Württemberg, Baden-Württemberg. Mildred was the daughter of Jonas Hamilton Woodsum and Mildred Eliza Swan, and was of mostly English, as well as distant Scottish, ancestry. Mildred’s family had long lived in New England.

Bridgit’s maternal grandfather was John Bailey Ford (the son of Kenneth Arthur Ford and Dorothy Jane Bailey). John was born in Illinois. Kenneth was the son of Arthur Lee Ford and Ethel M. Parker. Dorothy was the daughter of Harry Ulysses Bailey and Eliza Jane Colver.

Genealogy of Bridgit’s paternal great-grandmother, Mildred Munro Woodsum (focusing on her own mother’s side) – http://worldconnect.rootsweb.ancestry.com

Genealogy of Bridgit’s maternal great-great-grandmother, Ethel M. Parker (focusing on her own father’s side) – http://worldconnect.rootsweb.ancestry.com