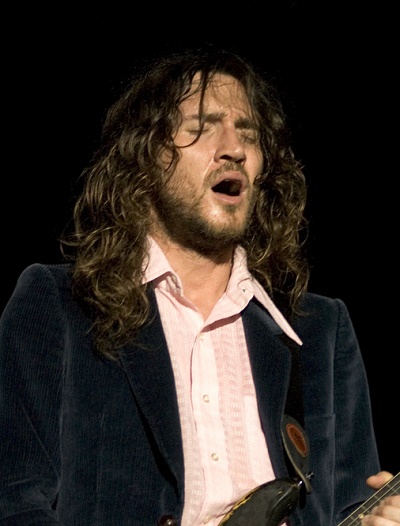 Frusciante in 2006, photo by Prphotos.com

John Frusciante is an American guitarist, singer, composer, and producer. He is a guitarist for the rock band Red Hot Chili Peppers. Other members of the band include/have included Flea, Anthony Kiedis, Josh Klinghoffer, Dave Navarro, and Chad Smith.

He is the son of Gail West (Haworth), a musician, and John Augustus Frusciante, a judge. His great-uncle was Ted Haworth, a film production designer and art director.

John’s maternal grandfather was Joseph Graham/George Haworth (the son of William Joseph/G. Haworth and Sarah Amelia/Anne Graham). John’s grandfather Joseph was born in Ohio. William was the son of Benjamin Haworth and Martha A. O’Leary, who were born in Lancashire, England. Sarah was the daughter of Thomas Graham and Ada Loa/I. Munson.

Genealogy of John’s maternal grandfather, Joseph Graham/George Haworth (focusing on his own mother’s side) – https://www.genealogy.com