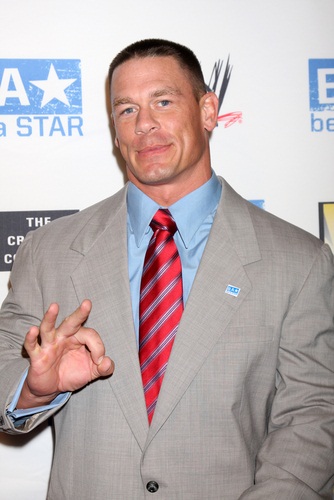 John is the son of Carol Frances (Lupien) and John Joseph Cena. John’s father is of Italian descent and John’s mother is of half French-Canadian and around half Colonial American (English) ancestry. His maternal grandfather was professional baseball player Tony Lupien. John is married to Shay Shariatzadeh.

John’s paternal grandfather was Felix Joseph Cena (the son of Agostino/August Cena and Madalena/Madolena Baleyns/Balegno). Felix was born in Tovey, Christian, Illinois, to Italian parents. Agostino was born in Livorno/Leghorn, Province of Livorno, Tuscany, the son of Guiseppe Cena and Margaret. Madalena was the daughter of Felice Baleyns/Belegante and Angela Gralia.

John’s paternal grandmother was Caterino Ann “Catherine”/Katherine DiVincenzo (the daughter of Antonio DiVincenzo and Felicia/Felecia Sardella/Saedella/Sardelli). Caterino was born in Beverly, Essex, Massachusetts, to Italian parents, from Pontecorvo, Province of Frosinone, Lazio. Antonio was the son of Domenico Ludovico DiVincenzo.

John’s maternal grandfather was Ulysses John “Tony” Lupien, Jr. (the son of Ulysses John Lupien and Eugenie Marie Gosselin). John’s grandfather Tony Lupien was born in Chelmsford, Middlesex, Massachusetts, the son of parents who were of French-Canadian descent. John’s great-grandfather Ulysses was City Manager of Lowell, Massachusetts. He was the son of Francois Xavier “Frank” Lupien, who was from St-Ours, Québec, and of Laura Mary/Marie Brusseau/Brouseau, who was from St-Jean, Québec. Eugenie was born in Matane, Québec, the daughter of Desiré J. Gosselin and Gracieuse “Grace” Guay.

John’s maternal grandmother was Natalie Nichols (the daughter of Charles Nichols and Julia/Julie Ellen/Helena Skelton). Natalie was born in Lowell, Middlesex, Massachusetts, and had deep Colonial American (English) roots, going back to the 1600s. Charles was the son of Charles H. Nichols and Martha Emma Dix. He was the Executive Secretary of the Massachusetts Republican State Committee. Julia was the daughter of Horace T. Skelton and Julia C. Hobbs.