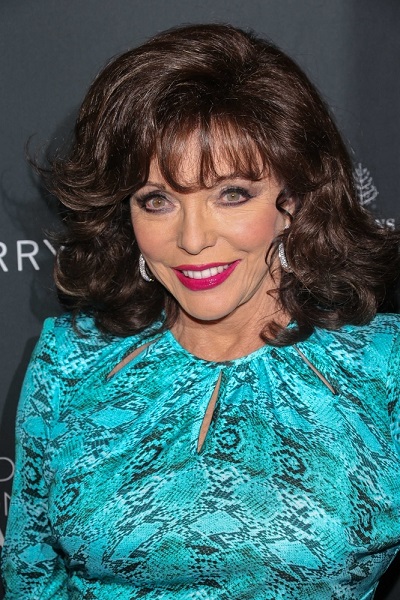 Collins in 2014, photo by Prphotos.com

Joan Collins is a British actress, author, and columnist. Her sister was writer Jackie Collins.

Joan’s father, Joseph William Collins, who was from Port Elizabeth, Eastern Cape, South Africa, was Jewish; he had Dutch Jewish and German Jewish ancestry, as well as English-born Jewish ancestors going back to at least the 1700s.

Joan’s mother, Elsa (Bessant), was English and from a Christian background, and also had French ancestry.

Joan’s paternal grandfather was William Isaac Hart (who later changed his surname to Collins, the son of Zussman Hart and Julia Phillips). William was born in London, England. Zussman was the son of Solomon Zelig Hart and Mary Ann Joel.

Joan’s paternal grandmother was Henrietta “Hettie” Assenheim (the daughter of Joseph/Judah Assenheim and Leah Miriam Aullert). Henrietta was born in Whitechapel, London, England. Joseph was the son of Juda Assenheim, who had roots in Germany and the Netherlands, and of Sara Isaac van de Kar, who was born in Amsterdam.

Source: Genealogy of Joan Collins (focusing on her father’s side) – http://www.geni.com