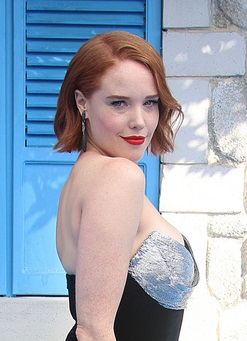 Jessica Keenan Wynn is an American actress and singer. She is known for her roles in Heathers: The Musical and Young Tanya in Mamma Mia! Here We Go Again, among other projects.

Jessica’s paternal grandmother was Eva Mae Lohr (the daughter of Edward D. Lohr and Edith B. Harshbarger). Eva Mae was born in Five Points, Pennsylvania. Edward was the son of William M. Lohr and Annie C. Cox. Edith was the daughter of Elmer Harshbarger and Margaret J. Beck.

Jessica’s maternal grandfather was Keenan Wynn (born Francis Xavier Aloysius James Jeremiah Keenan Wynn, the son of Ed Wynn and Hilda Keenan). Keenan was born in New York. Ed Wynn was an actor and comedian, and was born Isaiah Edwin Leopold in Philadelphia, Pennsylvania, the son of Jewish emigrant parents, Joseph/Leiser Leopold, who was born in Prague, Czechia, and Rosa/Emily/Minnie Greenberg, who was born in Istanbul, Turkey.

Genealogy of Jessica’s mother (focusing on her own father’s side) – https://www.geni.com