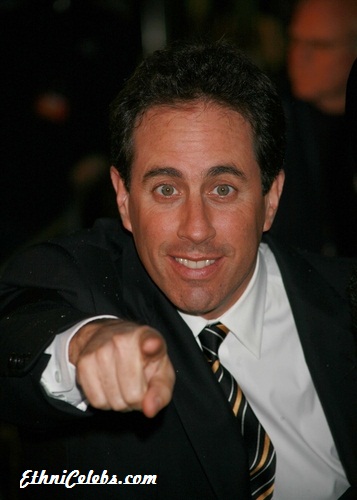 His father, Kalmen Seinfeld, was of Hungarian Jewish descent. His mother, Betty (Hesney), was the daughter of Syrian Jewish parents. Jerry spent some time in Israel, doing volunteer work, when he was a teenager. Jerry is married to Jessica Seinfeld (born Nina Danielle Sklar), a cookbook author and philanthropist, with whom he has three children. Jessica is Jewish.

Jerry’s paternal grandfather was named Shimshon/Schimscher “Simon” Seinfeld (the son of Jonas Seinfeld). Shimshon was from Stanislau, then in the Austro-Hungarian Empire.

Jerry’s maternal grandfather was Selim Hosni/Husney (the son of Ezra Husney and Esther Sardell). Selim was an emigrant from Aleppo, Syria. Ezra was the son of Eliyahu Husney.

Jerry’s maternal grandmother was Salha/Selha Kassin (the daughter of Sam Kassin and Garez Dayan). Salha was an emigrant from Aleppo, Syria. Garez was the daughter of Yishayah Dayan and Sarah.