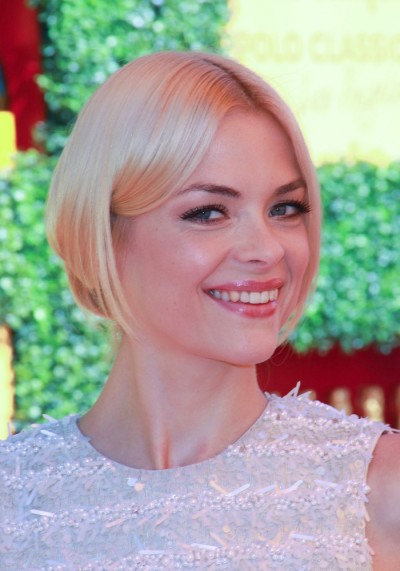 Jaime King is an American actress and model. She is known for her roles in Slackers, Frank Miller’s Sin City (as twins), and My Bloody Valentine 3D, among many other films. She has also been credited as James King, Jamie King, and Jaime King-Newman.

She is the daughter of Nancy and Robert King. Her mother was a beauty queen. Jaime is married to filmmaker and author Kyle Newman, with whom she has two children.

Jaime’s maternal grandfather was Lawrence Wagner Rice (the son of Lawrence Raymond Rice and Helen Wagner Hainkel). Jaime’s grandfather Lawrence was born in Kansas City, Missouri, and was a staff sergeant of the Air Force, who fought in World War II. Jaime’s great-grandfather Lawrence was the son of James L. Rice and Mary Elizabeth Greer, and had deep roots in the U.S. Helen was the daughter of Sigel Hainkel and Helen L. Wagner, who were born in the U.S, both of them to German parents. Through Mary Elizabeth, Jaime is a descendant of Solomon Israel de Pisa (1713-1795), a Sephardi Jew, from Amsterdam, who settled in North Carolina.

Jaime’s maternal grandmother was Margaret Josephine Reed (the daughter of Clair Burton Reed and Josephine Etta Brede). Margaret was born in Iowa. Clair was the son of Herbert Valdimer Reed, who had deep roots in the U.S., and of Jennie Spence, who was born in Canada, and whose father, and maternal grandparents, were Irish. Josephine was the daughter of Daniel Brede, who was the son of German emigrants, from Hessen and Baden, respectively; and of Wilhelmina “Minna” Schmidt, whose parents were also German.