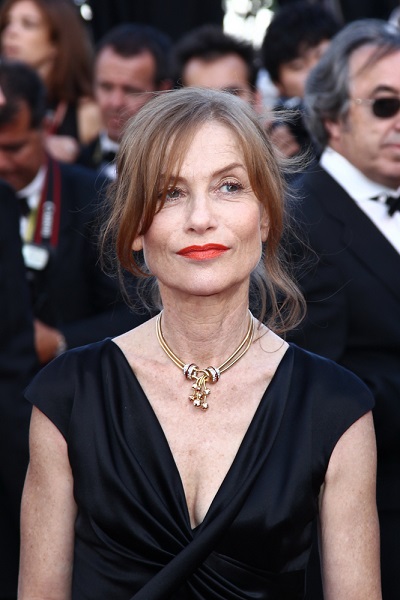 Huppert in 2011, photo by Prphotos.com

Isabelle Huppert is a French actress.

She is the daughter of Annick (Beau) and Raymond Huppert. Her father was from a Jewish family, from Slovakia and Alsace-Lorraine, and hid in North Africa during the Holocaust. Her mother was of French descent, and Catholic; Isabelle was raised in her mother’s faith.

Her sister is director and writer Caroline Huppert.

Isabelle is married to writer, producer, and director Ronald Chammah. Ronald is a Lebanese Jew. Their daughter is actress Lolita Chammah.

My father, of Jewish origin… married my Catholic mother during the occupation. With the war, he was obliged to silence his origins, then he continued [to do so after the war] and we were brought up in the religion of my mother. My father never spoke of it.

Isabelle’s paternal grandfather was Lajos Károly/Louis-Charles Huppert (the son of Samuel Huppert and Cécile/Cecilia/Cilli Wald). Louis-Charles was born in Prešov, now Slovakia, to a Jewish family.

Isabelle’s paternal grandmother was Jeanne Marcelle/Jane Marcella Lehmann (the daughter of Raphaël Robert Lehmann and Justine Recht). Jeanne Marcelle was born in Buenos Aires, Argentina, to Jewish parents from Colmar and Schaffhouse-sur-Zorn, Bas-Rhin, Alsace-Lorraine. Raphaël was the son of Isaac Lehmann and Fanny/Fany dite Vogel Bloch. Justine was the daughter of Samuel Recht and Gertrude Braun.

Isabelle’s maternal grandfather was Jean-Marcel Beau (the son of Émile Joseph Beau and Félicie Louise Marie Lebrun). Émile was the son of Jean-Luc Beau and Françoise Louise Eugénie Pingat. Félicie was the daughter of Gustave Lebrun and Louise Augustine Charton.

Isabelle’s maternal grandmother was Marie-Clémence Bertrand (the daughter of André Éloi Bertrand and Jeanne Rosalie Marthe Callot). Marie-Clémence was born in Paris. André was the son of Pierre Louis Bertrand and Marie Reine Théodore Jeannot. Isabelle’s great-grandmother Jeanne, known as Marthe Callot Bertrand, was one of the four Callot sisters, who founded Callot Soeurs, one of the leading fashion design houses of the 1910s and 1920s. Jeanne was the daughter of Baptiste Jean Adolphe Callot and Julie Marie Rival.

Sources: Interview with Isabelle about her Jewish background – http://jewishjournal.com

Genealogy of Isabelle Huppert (focusing on her mother’s side) – http://www.geni.com