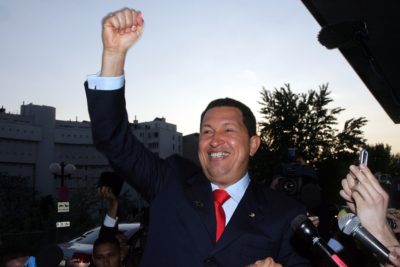 Chávez in 2006, photo by NorthfotoBP/Bigstock.com

They say that “La Negra” (The Black) Inés, my great-grandmother, was the daughter of an African who went through those plains, not that they say, it’s true, because when a hundred people say the same thing in a small town, it’s true. I know the name of that African grandfather, who was from the Mandingas (Mandinka), so I ended up being a Mandinga (Mandinka), “La Negra” was the mother of my grandmother Rosa Inés Chávez, who was a mix of Indigenous and African. Because, look!, my grandmother Rosa Inés’ father was an Italian who got up to “La Negra” Inés and they lived together for a while, they had Rosa Inés and Ramón Chávez, I remember him.

Hugo’s maternal grandmother was Benita Frías Frías (the daughter of Juan Pablo Frías and Marta Frías). Juan Pablo was the son of Eloy Unda y Márquez de Estrada, who was of part Basque and likely remote Indigenous Mexican descent (through his own paternal great-great-great-grandfather, Francisco de Moctezuma); and of Eliza Frías. Marta was the daughter of Genaro Frías.