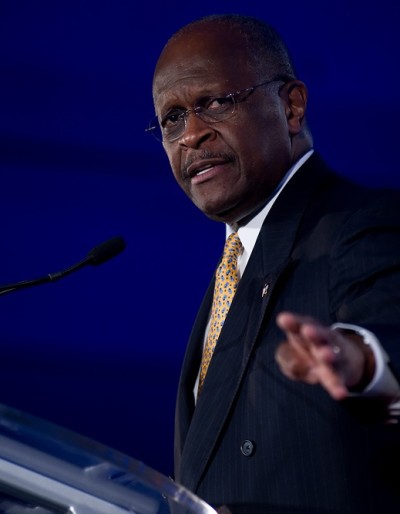 Herman Cain was an American author, businessperson, radio host, and columnist. He was a Tea Party activist. He served as Chair of the Federal Reserve Bank of Kansas City, from January 1, 1995 to August 19, 1996, and President of the National Restaurant Association, from 1996 to 1999.

He was a candidate for the Republican Party’s nomination for President of the United States in 2000 and 2012.

Herman was the son of Lenora (Davis), a domestic worker, and Luther Cain, Jr., a barber, janitor, and chauffeur. He was married to Gloria Etchison, until his death, with whom he had two children.

Herman’s paternal grandfather was Luther Cain, Sr. (the son of Henry William Cain and Susan Jones). Luther was born in Tennessee. Henry was the son of Washington Cain/Kane and Phoebe/Jane Washington.

Herman’s maternal grandfather was Eugene Davis (the son of James “Jim” Davis and Dora Furr). Eugene was born in Georgia.

Herman’s maternal grandmother was Fannie Lou Hoke (the daughter of Robert Hoke and Katie Hill/Jones). Fannie was born in Georgia.

Genealogy of Herman Cain (focusing on his father’s side) – https://www.geni.com