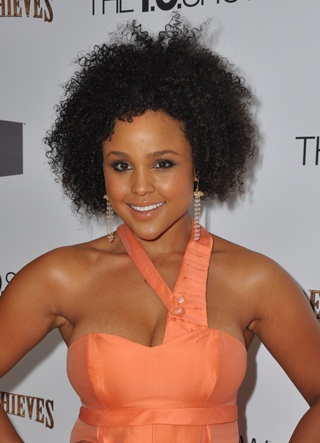 Hayley Marie Norman is an American actress and model. She first gained fame by appearing on the game show Deal or No Deal as a bubbly briefcase model.

Her father is African-American. Her mother has Russian, German, and some Dutch, ancestry.

Hayley’s paternal grandparents had the surnames Norman and Ware.

Hayley’s maternal grandfather was Frederick Beaudine Anderson (the son of Eugene Randolph Anderson and Marie Augusta Fleischer). Frederick was born in New York. His siblings were Robert J. Anderson (Robert James Anderson), an actor who played young George Bailey in It’s a Wonderful Life (1946), and Gene Anderson, Jr. (Eugene Ralph Anderson, Jr.), an assistant director. Hayley’s great-grandfather Eugene was the son of William James Anderson and Helena Bach, and had Dutch and German ancestry. Marie Fleischer was the daughter of Phillip Lorenz Fleischer and Augusta Frances Becker, and was of German descent.