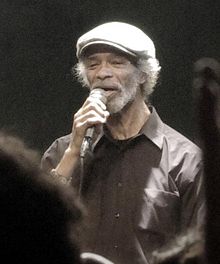 Scott-Heron in 2010, by mikael altemark

Gil Scott-Heron was an American soul and jazz poet, musician, and author. He is known for the spoken word works he produced during the 1970s and 1980s. He had a significant influence on hip hop and neo soul. He collaborated with artists such as Blackalicious, while his spoken word has been sampled by Kanye West, Common, Black Star (Mos Def, Talib Kweli), and Grand Puba, among others.

His father, Gil Heron (Gilbert Saint Elmo Heron), was born in Kingston, Jamaica. He was a professional footballer, known as “The Black Arrow,” and the first black player to play for Scottish club Celtic. His mother, Bobbie Scott, was an opera singer, who performed with the Oratorio Society of New York. She was African-American. Gil was raised partly by his maternal grandmother in Jackson, Tennessee, and by his mother in The Bronx, New York City.

His nephew, Terrance Kelly, also known as Mr. Cheeks, is an actor and rapper, who was a member of hip hop group Lost Boyz.