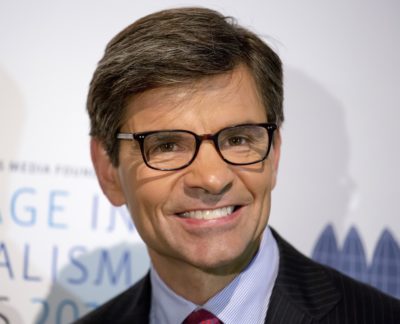 George Stephanopoulos is an American television host, journalist, political commentator, and former Democratic Party advisor. He is the chief anchor and chief political correspondent for ABC News. He served as White House Director of Communications, from January 20, 1993 to June 7, 1993, and Senior Advisor to the President, from June 7, 1993 to December 10, 1996.

George is the son of Nickolitsa “Nikki” and Robert George Stephanopoulos. His father has been a Greek Orthodox priest, and is dean emeritus of the Archdiocesan Cathedral of the Holy Trinity in New York City. His mother was director of the Greek Orthodox Archdiocese of America National News Service. George was raised in Purchase, New York, and then in Cleveland, Ohio.

George is married to comedian, actress, and writer Alexandra Wentworth, with whom he has two children.

George’s maternal grandfather was named Andreas Chafos (the son of Konstantino/Konstantine Tsafoulias/Chafos and Kalliope). Konstantino was the son of Andreas Tsafoulias and Despoina.

George’s maternal grandmother was named Margarite A. Nicolopoulos (the daughter of Konstantinos Nicolopoulos).

A DNA test whose results were displayed on the show Finding Your Roots with Henry Louis Gates, Jr. (2014) stated that George’s genetic ancestry is: