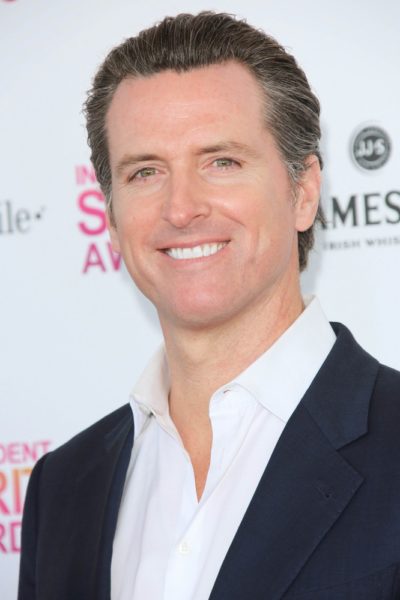 Gavin is the son of Tessa Thomas (Menzies) and William Alfred Newsom, a state appeals court judge and administrator of the Getty family trust. Gavin’s father was of seven eighths Irish descent, with the rest being mostly English. Gavin’s mother has English and Scottish ancestry.

Gavin is married to docuumentary filmmker and actress Jennifer Siebel Newsom, with whom he has four children.

He is a second cousin, once removed, of harpist, keyboardist, vocalist, songwriter, and actress Joanna Newsom.

Gavin’s maternal grandmother was Jean Thorburn Addis (the daughter of Thomas Chalmers Addis and Elesa Bolton Partridge). Jean was born in California. Thomas was born in Edinburgh, Scotland, and was a physician and scientist, who made important contributions to studying blood clots. Thomas was the son of Thomas Chalmers Addis, who was of half English and half Scottish descent, and of Cornelia Beers Campbell, who was born in New Orleans, Louisiana. Elesa was the daughter of John Partridge, who was Canadian, and of Emily Bolton.