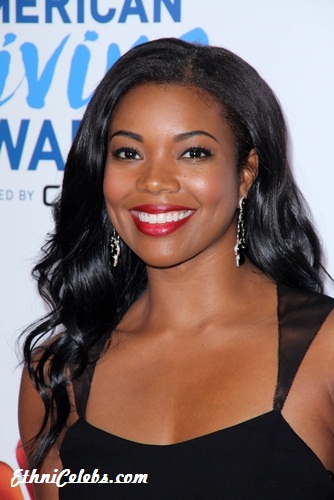 Gabrielle Union is an American actress and model. Her parents are both African-American. Her mother descends from the prominent Bryant-Fisher African-American family in Nebraska. Gabrielle is married to basketball player Dwayne Wade, with whom she has a daughter.

Gabrielle’s maternal grandfather was John Glass (born John Washington, the son of Charles Washington and Ora Belle Daniels). John was born in California. Ora was the daughter of Charles Daniels and Mattie Ingram.

Gabrielle’s maternal grandmother was Gloria G. Davis (the daughter of Virgil Davis and Myrtle Mae Fisher). Gloria was born in Nebraska. Virgil was the son of David Davis and Grace. Myrtle was the daughter of Frank Fisher and Emma Early.

In an interview, Gabrielle stated that she checked her ancestry and discovered that she has West African, Filipino, and Native American heritage. It is not clear if this Filipino and/or Native American ancestry has been verified/documented. No such lineage appears among Gabrielle’s recent ancestors. Gabrielle’s statements may be based on some kind of DNA test that she undertook (i.e., one that stated she has “Native American” and/or “Asian” ancestry).