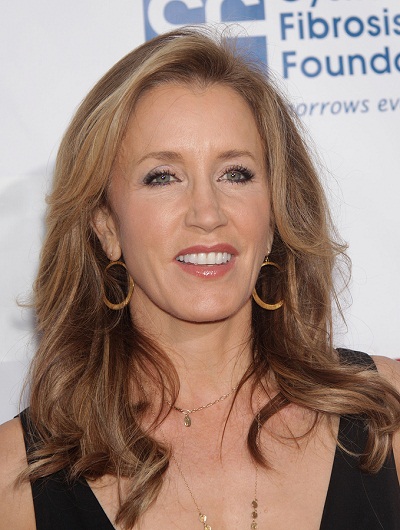 Felicity Huffman is an American actress. Her roles include television’s Sports Night, Desperate Housewives, American Crime, and When They See Us, and the films Transamerica, Georgia Rule, The Spanish Prisoner, Magnolia, Cake, and Tammy’s Always Dying.

Felicity’s biological paternal grandfather was Frank H./Kimball Maher (the son of John Maher and Anna/Anaseneah Tallman). Frank was born in Winsted, Litchfield, Connecticut. John was born in Ireland/Northern Ireland, and was the son of John Meagher and Mary. Anna was born in Washington County, New York, the daughter of Benjamin Franklin/Frank Tallman and Alzina Kimball.

Felicity’s biological paternal grandmother was Grace Brown (the daughter of Frederick Solyman Brown and Effie Grace Wooster). Grace Brown was born in Connecticut, to a family with ancestral lines in the state going back to the 1600s. Frederick was the son of Edgar Lucius Brown and Susan Taylor. Grace Wooster was the daughter of Hollis Wooster and Esther Betsey/Betsy Whitney.

Felicity’s maternal grandfather was William Ewing (the son of Frederick B. Ewing and Jessie Vallé). William was born in St. Louis, Missouri, and was a wealthy banker. Frederick was a prominent St. Louis businessperson, and was the son of William L. Ewing and Claire/Clara Berthold, who was of French heritage. Claire’s father was born near Trento, Trentino, Italy. Claire’s maternal great-grandfather, Pierre Laclède-Liguest, who was born in Bedous, Béarn, France, was the founder of St. Louis. Jessie was the daughter of François/Felix Jules Vallé and Isabella/Belle H. Sargent.

Felicity’s maternal grandmother was Maria von Phul Taylor (the daughter of Henry von Phul Taylor and Martha Newton “Mattie” Lindsay). Maria was born in St. Louis, Missouri. Henry was the son of Thomas Meredith/Meridith Taylor and Ann/Anna Maria/Marie von Phul, who herself was of German and French descent, with a maternal grandfather born in Versailles, France. Martha was born in New Mexico, the daughter of Andrew Jackson Lindsay and Jane “Jennie” Delaney/Delany, who was of Irish descent.

Genealogy of Felicity’s maternal grandfather, William Ewing (focusing on his father’s side) – http://worldconnect.rootsweb.ancestry.com