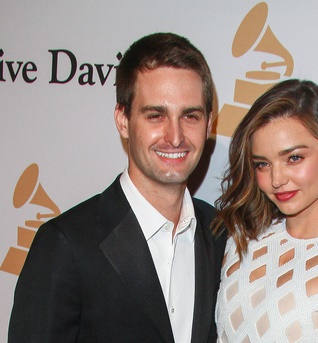 Spiegel with wife Miranda Kerr in 2016, photo by Prphotos

Evan Spiegel is an American Internet entrepreneur. He is the CEO of multinational technology and social media company Snap, Inc. He co-founded the company with Reggie Brown and Bobby Murphy.

He is the son of Melissa Ann and John Willson Spiegel. His ancestry is German, Irish, English, small amounts of French, Scottish, Swiss-German, and Welsh, and remote Cornish. Evan is married to Australian model Miranda Kerr, with whom he has two children.

While some websites state that Evan is Jewish, this is not the case. He is not of Jewish heritage. In terms of religion, he was raised an Episcopalian.

Evan’s maternal grandmother was Ann Theresa Beyerle (the daughter of Frank Christopher Beyerle and Sarah A. O’Malley). Ann was born in California. Frank was the son of Christian Beyerle, a German immigrant, and of Rosa Meyers, whose parents were German immigrants. Sarah was the daughter of Peter O’Malley and Mary O’Driscoll, a Canadian emigrant, from Georgetown, Ontario, whose own parents were Irish immigrants.

Genealogy of Evan’s paternal grandmother, Genevieve Josephine Willson (focusing on her own mother’s side) – http://wc.rootsweb.ancestry.com