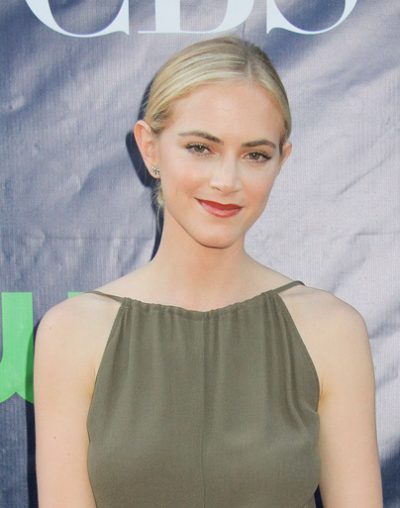 Emily Wickersham is an American actress.

Emily is the daughter of Amy (Kaiser) and John Atwood Wickersham.

Her father has English, Swedish, and German ancestry. Her mother is Jewish, of Russian Jewish and Austrian Jewish descent. Emily was raised in Mamaroneck, New York. She is married to musician Blake Hanley. Emily has stated (1:23), “Wickersham is English, I’m Austrian and Swedish. Born in Kansas.”

Emily’s paternal grandmother was Alice G. Anderson (the daughter of Axel Isadore Anderson and Elizabeth Estelle Shoemaker-Heckert). Alice was born in Missouri. Axel was born in Missouri, to Swedish parents, Lars Anderson/Andersson and Britta Nilsdotter, who were from Filipstad, Sweden. Elizabeth was the daughter of John Henry Shoemaker, who was Canadian, and of Wilhelmine Anna/Annie “Minnie” Land. Elizabeth was later adopted by Benjamin Heckert and Emily Metcalf.

Emily’s maternal grandmother is Doris/Dora Scharfstein (the daughter of Abraham “Abe” Scharfstein and Sylvia). Doris was born in Illinois, to Austrian Jewish parents.