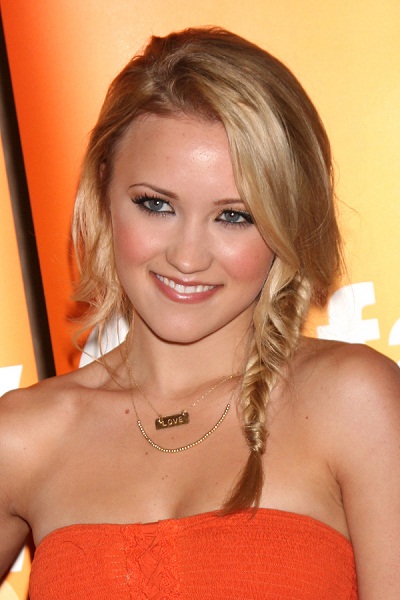 Osment in 2011, photo by kathclick/Bigstock.com

Emily Osment is an American actress, singer, and songwriter. She is the daughter of actors Theresa and Eugene Osment (Michael Eugene Osment), and the sister of actor Haley Joel Osment.

Emily’s maternal grandfather was Gordon Eugene Seifert (the son of Erhart/Ernhart/Ernest J. “Ernie” Seifert/Siefert and Agnes Mary McCardle). Gordon was born in Wisconsin. Ernest’s mother was Austrian. Agnes was the daughter of Patrick W. P. J. McCardle and Margaret “Maggie” Donnelly, who were born in Canada, both of them to Irish parents. Margaret’s father was from Armagh.

Emily’s maternal grandmother was Gertrude E. Mulvaney (the daughter of Ignatius Loyola Mulvaney and Katherine/Catherine Irene “Kate” Cavaness). Gertrude was born in Alabama. Ignatius was of Irish descent, the son of James C. Mulvaney and Mary Ann McManus. Katherine was the daughter of Willard D. Cavaness, who was of French, English, and German descent, and of Mary Ann McManus, who was of Irish descent.

Genealogy of Emily Osment (focusing on her mother’s side) – http://wc.rootsweb.ancestry.com

Genealogy of Emily’s maternal great-grandmother, Katherine/Catherine Irene “Kate” Cavaness (focusing on her own mother’s side) – http://familytreemaker.genealogy.com