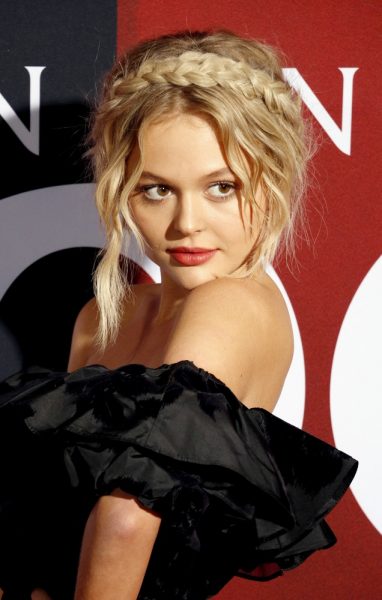 Emily Alyn Lind is an American actress. She is known for her roles in The Babysitter films and Doctor Sleep, among other films. She is the daughter of Barbara Alyn Woods, an actress, and John Lind, a producer. Her sisters are actresses Natalie Alyn Lind and Alyvia Alyn Lind.

Emily’s paternal grandmother is Gwen Leeder (the daughter of Benhardt/Bernard Walter Leeder and Norena/Nerena Mary Florence McCarthy). Bernhardt was the son of German parents, Friedrich Wilhelm Leeder, from Brandenburg, and Emilie Zastrow/Zastro, from Hanover. Norena was the daughter of Jeremiah Lawrence McCarthy, who was of Irish descent, and of Ida Annie Page, who was of half French-Canadian and half Irish ancestry.

Emily’s maternal grandfather was Allen Woods (the son of Leroy Searson Woods and Odessa Lee Spiva). Allen’s family was from Oklahoma. Leroy was the son of Lescher Dixon Woods and Nora Brown. Odessa was the daughter of Alvin Anderson/Andersen Spiva and Nina Leslie Leister/Lesiter.

Emily’s maternal grandmother was Patricia Anne Boone (the daughter of Merrill Ashton Boone and Margie Louise Ninneman). Merrill was born in Virginia, the son of Dexter Benjamin Boone and Mabel/Mable Clark Crook. Margie was born in Nebraska, the daughter of Gustav/Gus Albert Wilhelm/Wilheim Ninneman, whose parents were German, and of Winnifred Marie Shreeve.