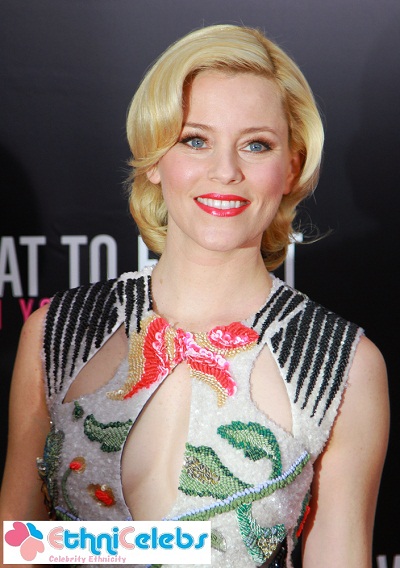 Elizabeth Banks is an American actress, director, and producer. She is known for her roles in Wet Hot American Summer, Spider-Man, Seabiscuit, The Hunger Games, Invincible, Role Models, The Uninvited, The Lego Movie, Love & Mercy, Power Rangers (2017), Scrubs, Modern Family, and Brightburn, among many other works. She has directed the films Pitch Perfect 2 and Charlie’s Angels (2019).

Elizabeth is the daughter of Ann, a bank employee, and Mark Mitchell, a factory worker. She is married to producer and writer Max Handelman, with whom she has two children.

Elizabeth was raised in a family of Protestant and Catholic background. Elizabeth’s husband is from a Jewish family, and Elizabeth went through the process of converting to Judaism. In 2013, she stated of her religion:

I did not have my mikveh, so technically I’m not converted… I’ve been essentially a Jew for like 15 years… I haven’t had a Christmas tree in 15 years… Frankly, because I’m already doing everything [in terms of religious practice], I feel like I’m as Jewish as I’m ever going to be.

Elizabeth’s maternal grandmother was Irene W. Howard (the daughter of Webster Eugene Howard and Eleanor M. Casey). Irene was born in Boston, Suffolk, Massachusetts, and had Irish and English ancestry, including deep Colonial American roots. Elizabeth’s great-grandfather Webster was the son of Charles William Howard, who was born in Wilton, Franklin, Maine, and of Alice C. Miskelly. Eleanor was the daughter of Richard L. Casey, whose parents were Irish, with his father being from County Cork; and of Eleanor/Ellen M. Carney, whose family was also Irish.

Genealogy of Elizabeth Banks (focusing on her father’s side) – http://familytreemaker.genealogy.com