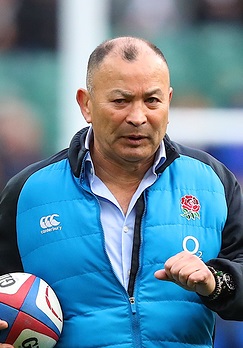 Jones in 2019, photo by sportsphotographer.eu/www.bigstockphoto.com

Eddie Jones is an Australian rugby union coach and player. He is the head coach of the England national team, and has previously coached Japan and Australia.

Eddie’s father was an Australian soldier who had met Eddie’s mother, Nellie, a Japanese woman who was then an army interpreter, while on duty in Tokyo in the late Forties. Eddie is married to Hiroko Jones, a Japanese woman, with whom has a daughter, Chelsea. Eddie speaks Japanese.