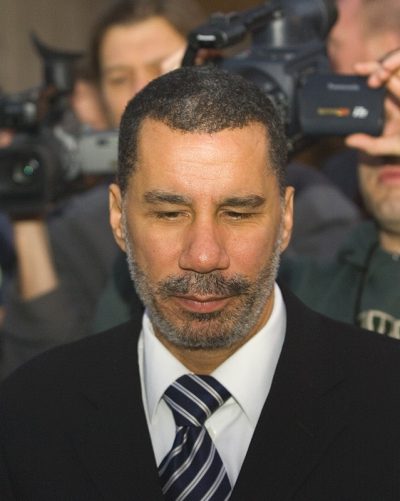 Paterson in 2009, photo by gjoe/Bigstock.com

David Alexander Paterson is an American politician. A member of the Democratic Party, he served as Governor of New York, from March 17, 2008 to December 31, 2010. He was also Minority Leader of the New York State Senate, from January 1, 2003 to December 31, 2006, and Lieutenant Governor of New York, from January 1, 2007 to March 17, 2008, among other duties. He became governor upon Eliot Spitzer’s resignation.

David is the first legally blind person to served as a U.S. Governor.

David is married to Mary Galda. He has a daughter with his former wife Michelle Paige.

David’s paternal grandfather was named Leonard James Paterson (the son of James Paterson and Elisia). Leonard was born on the island of Carriacou, in the Grenadines.

David’s paternal grandmother was named Evangeline Alicia Rondon. Evangeline was born in Kingston, Jamaica. She was a secretary for political activist, black nationalist, and orator Marcus Garvey, of the UNIA-ACL.

David’s maternal grandfather was Otis K. Hairston (the son of Rufus H. Hairston and Dorothy Rule). Otis was born in North Carolina. Rufus was the son of George Hairston and Polly.