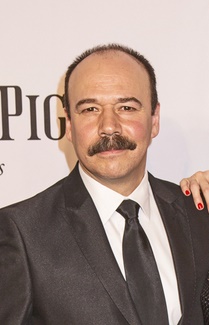 Burstein in 2014, photo by Prphotos

Danny Burstein is an American actor.

Danny’s mother, Virginia (Vega), who is Catholic, is from Costa Rica (with Spanish ancestry). Danny’s mother and biological father, Michael Melcher, separated when he was two months old.

When Danny was six, his mother married Harvey Burstein. Harvey, who became Danny’s stepfather, helped raise him. Harvey is from a Jewish family.

It is not (publicly) clear what Danny’s biological father’s ancestry is. Danny’s first language is Spanish. Danny has also said that his mother has some degree of Sephardi Jewish ancestry, although his mother and her family were Catholic by religion.

Danny was married to actress, singer, and recording artist Rebecca Luker, until her death. He has two children.