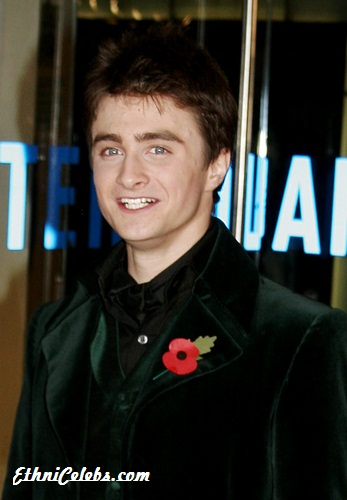 Daniel Radcliffe is a British actor. He is known for playing Harry Potter in the feature films based on the book series. Among his other roles are December Boys, The Woman in Black, Kill Your Darlings, Jungle, and Guns Akimbo.

Daniel’s father is from Northern Ireland, and was raised Protestant. He has Northern Irish and Irish ancestry; given the English surname Radcliffe, Daniel’s father likely also has English roots. Daniel has family in County Down.

Daniel is an atheist, and has repeatedly stated that he self-identifies as Jewish. For example, when asked by The Daily Beast if he considers himself Jewish, he stated:

Absolutely. I really do. My dad is Northern Irish and my mum is Jewish. That’s working blood. Though I am not religious in the least, I am very proud to be Jewish.

Daniel’s maternal grandfather was Wilfred Jacobson (the son of Saul Harry Jacobson and Harriette Harris). Wilfred was from Johannesburg, South Africa. Saul was a Lithuanian Jewish immigrant. Harriette was born in London, to a Jewish family.

Daniel’s maternal grandmother is Muriel Jean Patricia Gresham (born Gershon; the daughter of Samuel “Sam” Gershon and Rachel/Raie Diana Jacobs). Muriel was born in Rochford, Essex, England. Samuel was born in Hackney, London, England, and was the son of Louis Gershon, who was born in Wreschen, now Września, Posen, Germany, now Poland; and of Jessie Greenwall/Lipman, who was born in Kalisz/Kalisch, Wielkopolskie, Poland. The couple had lived in South Africa. Daniel’s great-grandmother Rachel was also born in London, to Maurice Jacobs (the son of Yehuda Leib/Louis Krengel and Bessie Sara Marks) and Julia Jacobs or Millie Cohen (the daughter of Maurice Cohen).

Sources: Information about Daniel’s appearance on Who Do You Think You Are?, 2019 – https://www.thegenealogist.co.uk
https://jewishnews.timesofisrael.com
https://www.theguardian.com