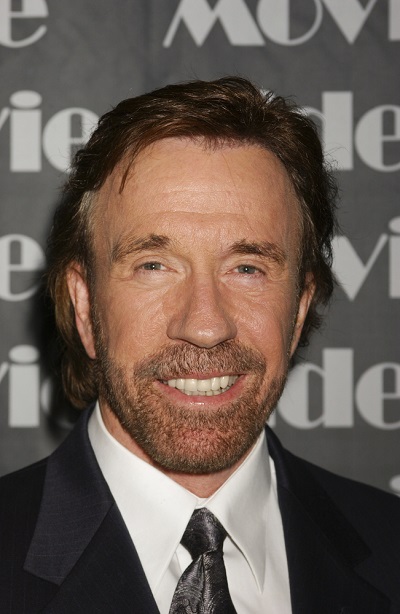 Chuck Norris is an American martial artist, actor, film producer, and screenwriter. His many film roles include Way of the Dragon, Breaker! Breaker!, Good Guys Wear Black, The Octagon, Lone Wolf McQuade, the Missing in Action franchise, Code of Silence, Invasion U.S.A., and The Delta Force, as well as the series Walker, Texas Ranger.

Chuck is the son of Wilma (Scarberry) and Ray D. Norris. He was raised partly in Prairie Village, Kansas, and then Torrance, California. He is married to model Gena O’Kelley. He has five children, including actor Mike Norris and stock car racing driver and stuntman Eric Norris.

However, these statements do not appear to be accurate, at least not strictly speaking. Most of Chuck’s recent ancestors, including his paternal grandfather, were U.S.-born. His family tree contains mostly English surnames and English-born distant ancestors, along with a smaller amount of Scottish, Welsh, and German, roots, and remote French, Swedish, and Dutch. No Native American ancestry has been verified/documented in any publicly available family trees of Chuck Norris, and all of Chuck’s grandparents are described as “white” on U.S. censuses.

Chuck’s patrilineal line traces to a John Norris, who was born, c. 1525, in Norfolk, England.

Chuck’s paternal grandfather was named James Henry Norris (the son of William/Simon Norris and Eliza Ann). James was born in Tennessee. William was the son of Samuel/Sam Norris and Melissa/Malissa Curtis.

Chuck’s paternal grandmother was Ella May “Ellie” Tinker (the daughter of James Asbury Tinker and Clarisa Ann “Clara” Cofer). Ella was born in California. James was the son of Jesse Tinker and Margaret McArthur.

Chuck’s maternal grandfather was named John Porter Scarberry (the son of Martha Scarberry). John was born in Kentucky. Martha was the daughter of Richard E. Scarbrough and Eliza Jane Smith.

Chuck’s maternal grandmother was Ada Agnes Hargrove (the daughter of Zachary Phelon Hardgrove/Hargrove and Alice/Jemimie Hill). Ada was born in Texas. Alice was the daughter of Moses Perry Hill and Ellen Elizabeth Nix.

Genealogy of Chuck’s maternal grandfather, John Porter Scarberry (focusing on his own father’s side) – http://worldconnect.rootsweb.ancestry.com