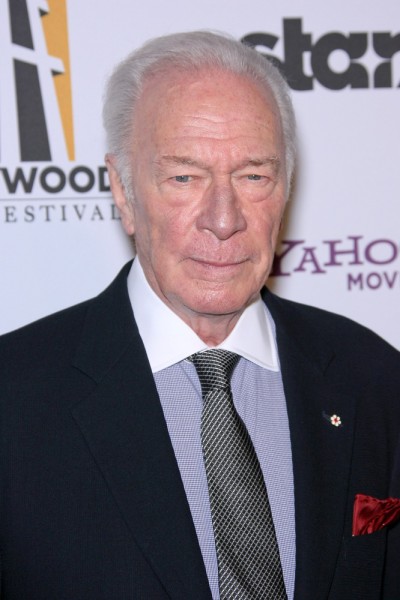 Plummer in 2011, photo by PrPhotos.com

Christopher Plummer was a Canadian actor of stage and screen. He won the Academy Award for Best Supporting Actor for Beginners (2011), and was also nominated for Academy Awards for The Last Station and All the Money in the World, all three times while in his 80s; for the third film, at the age of 88, he was the oldest actor ever to be nominated. He also starred in in the films Knives Out, The Sound of Music, The Insider, and Remember, among many others.

Christopher was the son of Isabella Mary (Abbott), an artist and watercolourist, and John Orme Plummer. His father was born in Idaho, U.S., to Canadian parents. Christopher was of Scottish, English, Northern Irish, Cornish, 1/64th Swiss-French, and 1/64th French-Canadian, ancestry. He was raised in Senneville, Québec, at his maternal grandparents’ family home. Christopher was said to have been a second cousin of actor Nigel Bruce.

He was married to English actress Elaine Taylor, until his death. With his former wife, American actress Tammy Grimes, he is the father of actress Amanda Plummer. Christopher’s maternal great-grandfather, John Abbott, was the third Prime Minister of Canada, from June 16, 1891 to November 24, 1892, and the first Prime Minister of Canada to have been born in Canada.

Christopher’s paternal grandfather was Frank Plummer (the son of William H. Plummer and Mary Elizabeth/Elisabeth Williams). Frank was born in Algoma, Ontario, Canada, to English-born parents. William was born in Mary Tavy, Devon, the son of Thomas M. Plummer and Maria/Mariah Davey. Elizabeth was the daughter of William Williams and Mary Launey. Christopher’s grandfather had roots in Cornwall.

Christopher’s maternal grandfather was Arthur Edward Abbott (the son of Prime Minister, John Joseph Caldwell Abbott, and of Mary Martha Bethune). Arthur was born in Québec, Canada. Prime Minister Abbott was born in Saint-André, Lower Canada, the son of English emigrants, The Rev. Joseph Abbott, an Anglican missionary and clergyman, from Little Strickland, Westmorland, and Harriet A. Bradford, from Worstead, Norfolk. Christopher’s great-grandmother Mary Martha’s father, The Rev. John Wadden Bethune, was an Anglican clergyman, who was acting principal of McGill University; his own father, the Rev. Dr. John Bethune, founded the first Presbyterian Church in Montréal, and was from Isle of Skye, Scotland, and his own mother, the daughter of fur trader Jean-Étienne Waddens, was of Swiss-French and French-Canadian descent. Christopher’s great-grandmother Mary Martha’s mother, Christopher’s great-great-grandmother, was Elizabeth Hallowell.

Genealogy of Christopher Plummer (focusing on his father’s side) – http://www.thepeerage.com

Genealogy of Christopher Plummer (focusing on his mother’s side) – https://www.findagrave.com