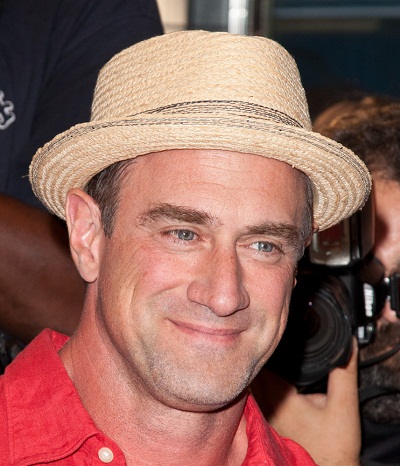 Christopher Meloni is an American actor. He is known for his roles on the shows Law & Order: Special Victims Unit and Oz, and the Wet Hot American Summer franchise, among other work. He is also credited as Chris Meloni.

Christopher is the son of Cecile Lydia (Chagnon) and Charles Robert Meloni. He is married to production designer, Doris, with whom he has two children.

Christopher’s paternal grandfather was Carlo/Charles Robert Meloni (the son of Enrico Meloni and Maria Luigia Anna Cafferata). Charles was born in Massachusetts, to Italian parents. Enrico and Maria were born in Velva, Castiglione Chiavarese, Genova, Liguria. Enrico was left as a baby in a foundling wheel in a hospital. He was assigned the surname Meloni there, and was partly raised by a nurse.

Christopher’s paternal grandmother was Mary Repetti (the daughter of Ferdinand Repetti and Anna Guglielmetti). Mary was born in Boston, Massachusetts, to Italian parents.

A DNA test whose results were displayed on the show Finding Your Roots with Henry Louis Gates, Jr. (2021) stated that Christopher’s genetic ancestry is:

Genetically, he was found to have a common ancestor with politician Nancy Pelosi.