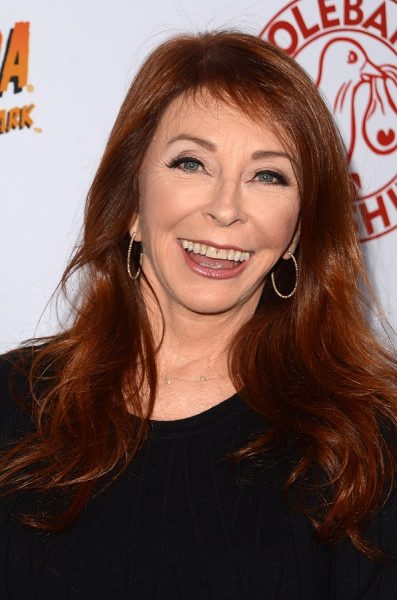 Peterson in 2016, photo by kathclick/Bigstock.com

Ethnicity: German (around half), Swedish (37.5%), smaller degrees of English, Scots-Irish/Northern Irish, and Polish

Cassandra Peterson is an American actress, writer, and singer. She is known for her portrayal of the horror hostess character Elvira, Mistress of the Dark. She hosted the horror film show Elvira’s Movie Macabre, and starred in the films Elvira: Mistress of the Dark (1988) and Elvira’s Haunted Hills (2001), among other B-movie roles.

Cassandra is the daughter of Phyllis and Dale Peterson. She has a daughter with her former husband, musician Mark Pierson, who was her personal manager.

Cassandra’s paternal grandmother was Ivah Amanda Singer (the daughter of John Martin Singer and Anna L. Held). Ivah was born in Randolph, Kansas. John was the son of Franz B. Singer and Victoria Eva Stoehr, who were German emigrants, from Württemberg. Anna was the daughter of Jacob Gaboren Held, a German emigrant, from Bavaria, and of Amanda Jane Reddick, who was approximately of three quarters German and one quarter Scots-Irish/Northern Irish ancestry, with some distant English.

Cassandra’s maternal grandfather was Herbert Arthur Schmidt (the son of John Schmidt and Catherine Trudnowski). Herbert was born in Nebraska, to German parents. John was the son Phillip Schmidt and Elizabetha Flieshouer. Catherine was the daughter of Anton Trudnowski and Mary Schultz. She likely had some degree of Polish ancestry.

Cassandra’s maternal grandmother was Ethel Augusta Dooley (the daughter of Jacob Dooley and Hannah Christine Danielson). Ethel was born in Ceresco, Nebraska. Jacob was the son of Jacob Dooley, whose mother was of German descent; and of Margaret Wakefield, who was of British descent. Hannah was a Swedish immigrant, and was the daughter of Johannes Gustave Danielson and Christina Andersdotter.