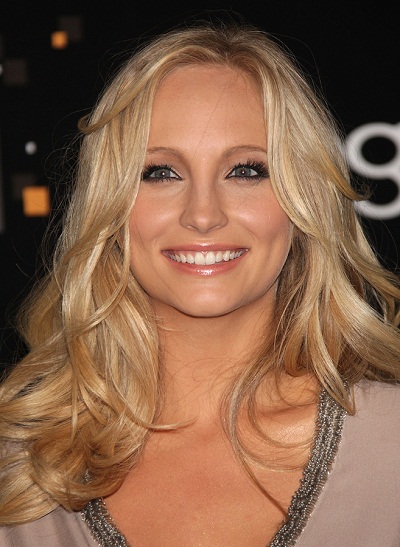 King in 2011, photo by DFree/Bigstock.com

Candice King, previously credited by her birth name Candice Accola, is an American actress, singer, and songwriter. She is the daughter of Carolyn, an environmental engineer, and Kevin Accola, a cardiothoracic surgeon. She is married to musician Joe King, of The Fray. The couple has two children.

Candice’s paternal grandfather was Donald Adrian Accola (the son of Ralph Arnold Accola and Joyce Helen Sheldahl). Donald was born in Iowa. Ralph was of Swiss descent, and was the son of Louis Luzy Accola and Carolina Minnie “Carrie” Allemann. He had roots in Davos, Graubünden. Joyce was of Norwegian ancestry, and was the daughter of Joseph E. Sheldahl and Maytie Malinda Lundy. She had roots in Hordaland and Rogaland.

Candice’s paternal grandmother was Betty/Bette Jean Larson (the daughter of Floyd Earl Larson and Audrey Oueda Highland). Betty was born in Iowa. She re-married to a Methodist minister. Floyd was the son of Swen Theodore Larson, whose parents were Norwegian, and of Annie Caroline Henderson, whose grandparents also were all Norwegian. Audrey was the daughter of Thor O. Highland, who was Norwegian, from tnesjoen, Etne kommune, Hordaland fylke, and of Ida Olson, whose paternal grandparents were Norwegian, as was her mother, who was also born in Hordaland fylke.

Candice’s maternal grandfather is Nelson “Red” Clark (the son of Layton Clark and Johnnie Gwendolyn Coe). Johnnie was the daughter of John Coe and Ethel Seagle.

Candice’s maternal grandmother is Arla Smith (the daughter of John L. Smith and Mildred Harrelson). John was the son of John R. Smith and Effie Claxton.