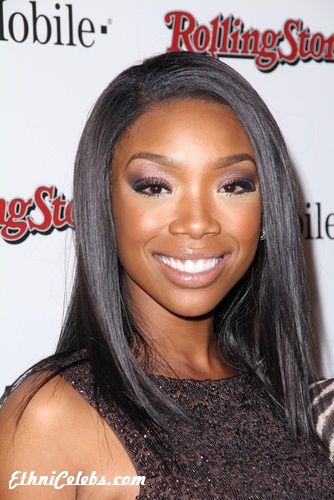 Brandy Norwood, also credited simply as Brandy, is an American singer, songwriter, record producer, and actress. She has starred in the films Cinderella (1997) and I Still Know What You Did Last Summer (1998).

Brandy is the daughter of Sonja (Bates) and Willie Norwood (William Ray Norwood), a gospel singer. Her brother is singer and actor Ray J. She is also known as Bran’Nu and B Rocka.

Brandy has a daughter with her former partner, record producer, composer, songwriter, and musician Big Bert.

Brandy’s paternal grandfather was W. T. Norwood (the son of Ray Norwood and Kitty Triplett). W. T. was born in Mississippi. Ray likely was the son of Martha Norwood. Kitty was the daughter of Dock Triplett and Mary F. Haynes.

Brandy’s maternal grandfather is Fred “Freddie” Bates (the son of Eugene W. Bates and Genora/Geornia Day). Fred was born in Mississippi. Through this line, Brandy is a first cousin, once removed, of blues singer, guitarist, and songwriter Bo Diddley. Eugene and Genora were Bo’s paternal grandparents.

She is said to be a cousin of rapper Snoop Dogg and professional wrestler Sasha Banks.