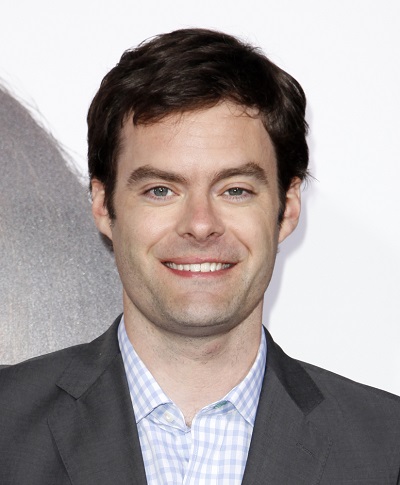 Bill Hader is an American comedian, actor, producer, and writer.

Bill has three children with his former wife, director and screenwriter Maggie Carey.

Bill’s paternal grandmother was Joan Thompson Enright (the daughter of John Leroy Enright and Hannah Louise Thompson). Joan was born in Illinois. John was born in Chicago, to Irish parents, John J. Enright, from Lenamore, Ballylongford, Kerry, and Catherine Wallace, from Glyn, Limerick. Hannah was also born in Illinois, to Joseph James Thompson and Julia E. McNamara, both of whom were of Irish descent.

Bill’s maternal grandfather was Jack Montgomery Patton (the son of Thomas Edward Patton and Florence Etta Montgomery). Jack was born in Arkansas. Thomas was the son of John Wesley Patton and Mary Ellen Vance. Florence was the daughter of Jasper Montgomery and Mary Ann Chambers.

Bill’s maternal grandmother was Billie Ernestine Beard (the daughter of William Thomas Beard and Violet Emaline Fike). Billie was born in Oklahoma. William was the son of Andrew Porter Beard and Effa/Effie Ella King. Violet was the daughter of Nathan/Nathaniel Carol Fike and Unity Emily Conner.

A DNA test whose results were displayed on the show Finding Your Roots with Henry Louis Gates, Jr. (2016) stated that Bill’s genetic ancestry is:

The Sub-Saharan African DNA is from his mother’s side.

Genetically, he was found to have a common ancestor with comedian and actress Carol Burnett.