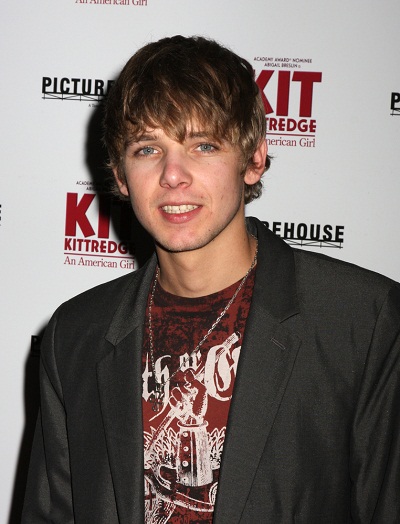 Thieriot in 2008, photo by Prphotos

Max Thieriot is an American actor and vintner.

He is the son of Bridget and George Thieriot. Max is married to Lexi Murphy, with whom he has two children. His brother-in-law (sister’s husband) is professional baseball player Michael Stutes.

Max’s great-grandmother Kathleen was the daughter of Michael Henry “M. H.” de Young. Michael was the son of Michele/Michael Henri de Young/deYoung, a Dutch Jewish emigrant, from Amsterdam, and of Amelia Michelle Morange, a French Jewish emigrant, from Gironde, France; Amelia was the daughter of Benjamin Morange and Bella. Benjamin Morange served as the Minister from France to Spain, under Napoleon. Max’s great-great-grandfather Michael co-founded the San Francisco Chronicle, along with his brother, Charles de Young. Kathleen’s mother, Max’s great-great-grandmother Katherine Isabelle “Kate” Deane, was the daughter of James Russell Deane, who was born in Daingean, County Offaly, Ireland, and of Margaret McDonald, who likely also had Irish ancestry. Katherine Deane was Catholic, and it is possible that Max’s Jewish-born great-great-grandfather converted to Catholicism.

Max’s paternal grandmother was Frances Harrison Dade (the daughter of Waller Holladay Dade and Clara L. Everhart). Frances was born in Manila, in the Philippines, to American parents. Walter Dade, who had English ancestry, was the son of Henry Fitzhugh Dade and Mary Carol Holladay. Clara’s father was Charles Augustus Everhart, whose own father, Jacob Everhart, was German, and whose own mother was named Cary Buckley Roberts. Clara’s mother was Fidelia Arabella Gee, whose parents were Daniel Gee, who was English, from Lancashire, and Emily Mary Gilbert, who was of English descent.

Max’s maternal grandfather was Donald Ross Snyder, Jr. (the son of Donald Ross Snyder and Clara Junice Anderson). Max’s grandfather Donald was born in Minnesota. Max’s great-grandfather Donald was the son of Arthur Drake Snyder, who had English and Scottish ancestry, and of Mary Magdaalene Hesseldahl, whose parents, Nicholias Gretinius Hesseldahl (from Ringsted) and Magdalena Mikkelsen Hummelshoj, were Danish. Clara was the daughter of Christ Carl Anderson, whose parents, Knud Anderson/Andersen Veim and Marthe/Marta Marie Pedersdatter, were Norwegian, and of Josephine Thorson, whose parents, Nils Moland Thorson and Johanna N. Jacobsen, were also Norwegian.

Max’s maternal grandmother was Nancy Jo Neuhalfen (the daughter of Vernon Leo Neuhalfen and Frances Eunice Cole). Nancy was born in Minnesota. Vernon was the son of August E. Neuhalfen, whose parents were German, and of Bertha Henrietta Quaday, whose parents, Charles Ludwig Quade/Quaday and Paulina W. Paschke, also were German, from Saale-Holzland-Kreis. Max’s great-grandmother Frances, who had English, and some German and Northern Irish, ancestry, was the daughter of Edgar Henry Cole and Sarah Evalena Sharpley; Edgar was the son of George Horatio Cole and Clementine Erphelia Rorman, while Sarah was the daughter of James Sharpley and Sarah Ann Finch.

Sarah Ann Finch was the daughter of Henry Finch and Barbara Mary Clindinnan, who were born in Northern Ireland. Barbara’s parents were Henry Clindinnan and Elizabeth.

Genealogy of Max’s father (focusing on his own father’s side) – http://worldconnect.rootsweb.ancestry.com

Genealogy of Max’s paternal grandfather, Ferdinand Melly Thieriot (focusing on his own mother’s side) – http://www.findagrave.com

Genealogy of Max’s paternal great-great-grandfather, Henry Fitzhugh Dade (focusing on his own mother’s side) – http://worldconnect.rootsweb.ancestry.com

Genealogy of Max’s paternal great-great-grandmother, Mary Carol Holladay (focusing on her own mother’s side) – http://worldconnect.rootsweb.ancestry.com

Genealogy of Max’s paternal great-great-grandmother, Fidelia Arabella Gee (focusing on her own mother’s side) – http://worldconnect.rootsweb.ancestry.com