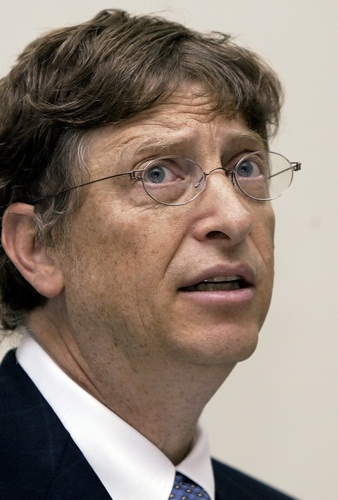 Bill Gates is an American businessperson, entrepreneur, philanthropist, programmer, inventor, and investor. He is usually ranked as one of the top 10 richest people in the U.S.

Bill is the son of Mary A. (Maxwell), a businessperson, and William Henry Gates, an attorney, philanthropist, and civic leader. He has considerable Colonial American (English) ancestry, as well as more recent immigrant roots, from England and Germany. He is married to philanthropist Melinda (French) Gates, with whom he has three children.

“The Good Samaritans” won Time Magazine’s Person of the Year for 2005. Bill was one of three persons chosen to represent that title, along with Bono and Bill’s wife Melinda Gates.

Bill’s maternal grandmother was Adele/Adelle Thompson (the daughter of William James Thompson and Ida Medcalf/Metcalf). Adele was born in Enumclaw, King, Washington. William was born in Liverpool, Lancashire, England, the son of J. W. Thompson and Julia Thomas. Ida was born in Montesano, Grays Harbor, Washington, the daughter of John T. Medcalf/Metcalf, who was born near Montréal, Québec, Canada, to a mother from Ashton-under-Lyne, Lancashire, England; and of Susan E. Reid/Reed/Ried.