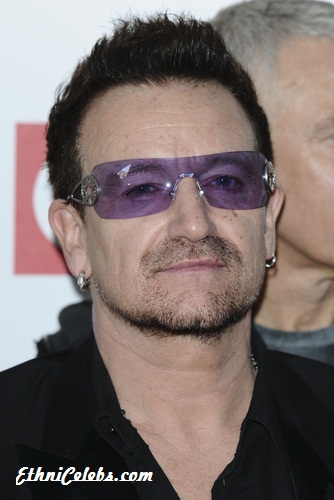 Bono is an Irish singer, songwriter, musician, venture capitalist, businessperson, and philanthropist. He is the lead vocalist of Irish rock band U2. Other members of the band are Adam Clayton, The Edge, and Larry Mullen, Jr.

Bono is the son of Iris (Rankin) and Brendan Robert Hewson. He is of Irish, as well as at least some Scottish, ancestry. His father was Catholic and his mother was Protestant. Bono is married to activist and businessperson Ali Hewson (born Alison Stewart), with whom he has four children, including model and actress Eve Hewson (Memphis Eve Sunny Day Hewson).

“The Good Samaritans” won Time Magazine’s Person of the Year for 2005. Bono was one of three persons chosen to represent that title, along with Bill Gates and Melinda Gates.

Bono’s paternal grandfather was Robert Francis/Frances Hewson (the son of Thomas Hewson and Mary Barry). Robert was born in Dublin. Thomas was the son of Robert Hewson and Mary Ann/Anne Mulhall/Mullhall. Bono’s great-grandmother Mary was the daughter of Richard Barry and Anne Doyle.

Bono’s maternal grandmother was Lillian Purcell (the daughter of Arthur Thomas Purcell and Elizabeth “Lizzie” Beamish). Lillian was born in Dublin. Arthur was the son of William Purcell. Elizabeth was the daughter of John Beamish.

Tags: IrishScottishTime Person of the Year