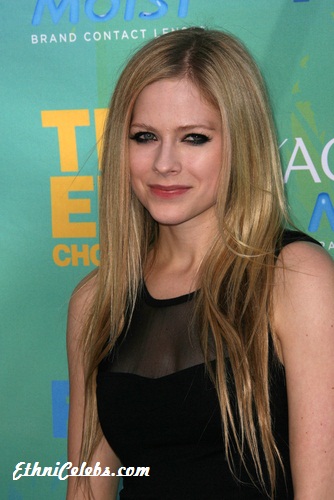 Avil Lavigne is a Canadian singer, songwriter, and actress.

Avril is the daughter of Judith-Rosanne “Judy” (Loshaw) and Jean-Claude Lavigne. She was born to a devout Christian family. Avril means April and Lavigne means “the vineyard” in French. Her father was born at RCAF Station Grostenquin in Grostenquin, Moselle, France, where his own French-Canadian father was stationed. Through her father, Avril is a direct descendant of Zacharie Cloutier (c. 1590-1677), a prominent early Québec settler.

Avril does not speak French, though she has a French passport.

Avril’s patrilineal line can be traced back to her tenth great-grandfather, Arthur Tessier.

Avril’s paternal grandfather was Joseph-Charles-Maurice Yves Lavigne (the son of Osias Joseph Lavigne and Anita Finger). Yves was born in Saint-Jérôme, La Rivière-du-Nord, Québec. Osias was the son of Joseph Lavigne and Marie-Victoire “Victoria” Tremblay. Anita was the daughter of Charles Finger, who was a French emigrant, from Dijon, Côte-d’Or, and of Malvina Beauvais, from Québec. Victoria’s maternal sixth great-grandmother, Marie Miteouamigoukoue, was a Weskarini Algonquin First Nation.

Avril’s paternal grandmother was named Lucie Dzierzbicki/Dzierbicki. Lucie was French, from Morhange, Forbach-Boulay-Moselle, and was of Polish descent.

Avril’s maternal grandfather was John William Loshaw (the son of Samuel Loshaw and Martha Donaldson). John was born in Ontario, Canada. Samuel was the son of George Washington Loshaw, who had ancestors from Connecticut, and of Lydia Jane Brewster, whose father was from New York. Martha was born in Glasgow, Scotland, the daughter of Robert Donaldson and Margarett/Margaret Cowan.

Genealogy of Avril Lavigne (focusing on her father’s side) – http://bowergenealogy.ca