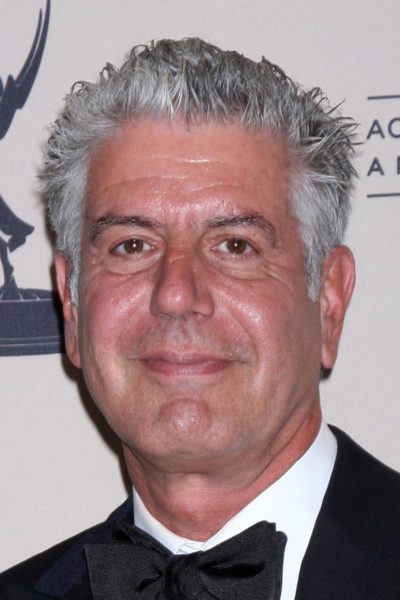 Bourdain in 2013, photo by kathclick/Bigstock.com

Anthony Bourdain was an American celebrity chef, author, travel documentarian, and television personality. He was one of the most influential chefs in the world.

He was the son of Gladys (Sacksman) Bourdain, a staff editor for The New York Times, and Pierre Bourdain, a classical music industry executive for Columbia Records. He had a daughter with his wife Ottavia Busia.

Anthony’s father was born in New York, to a Catholic family, and was of French, and some Spanish, descent; his family had also lived in Brazil, Uruguay, Paraguay, and Gibraltar. Anthony’s mother was Jewish, of Ukrainian Jewish and Austrian Jewish descent. Anthony was secular, though he did refer to himself as Jewish.

Anthony’s paternal grandfather was Pierre Michel Bourdain (the son of Aureliano/Aurélien Bourdain and Mathilde Belliard). Pierre was born in Loire, Departement de Maine-et-Loire, Pays de la Loire, France. Aureliano was raised in Sao Pedro, Rio Grande do Sul, Brazil, and was the son of Jean (or João in Portuguese) Bourdain, who was French, and had lived in Paraguay; and of Aurelia Francia.

Anthony’s maternal grandfather was Milton Sacksman (the son of Wolf/William Sacksman and Sarah Adler). Milton was born in Ostroh, Rivnens’ka oblast, Ukraine, to a Jewish family.

Genealogy of Anthony Bourdain (focusing on his father’s side) – https://www.findagrave.com