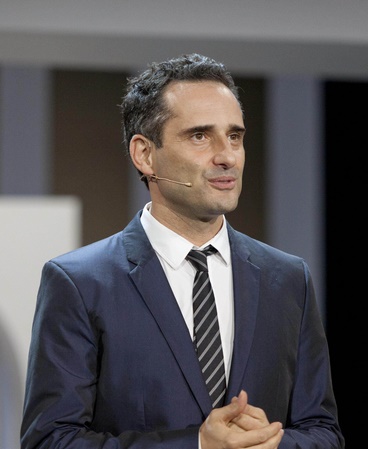 Drexler in 2012, photo by Prphotos

Jorge Drexler is a Uruguayan musician, actor, and doctor. He is the first Uruguayan to win an Academy Award, for composing the song “Al Otro Lado del Río” for The Motorcycle Diaries.

Jorge’s father, Günther Schlein Drexler, was a German Jew who escaped the Holocaust in Germany, and moved to Uruguay with his family, at the age of four. Jorge’s mother, Lucero Prada da Silveira, is a Christian Uruguayan, of French, Portuguese, and Spanish-Uruguayan descent. Jorge was raised Jewish.

He is a cousin of physicist Alejandra Melfo. He has a son with his former wife, Spanish singer and songwriter Ana Laan, and two children with his partner, Spanish film actress and singer Leonor Watling.

Jorge’s paternal grandmother was named Ruth Schlein (the daughter of Heinrich Schlein and Marie). Ruth was born in Królewska.