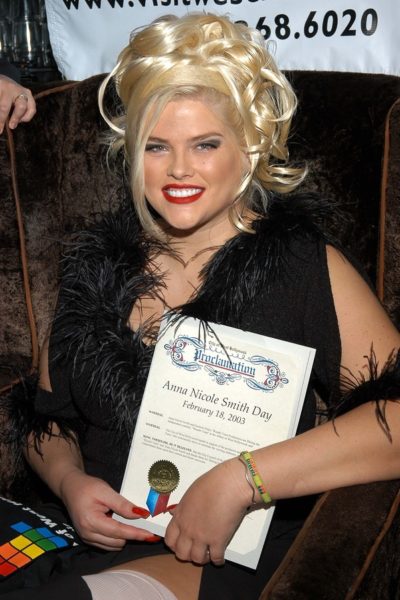 Smith in 2003, photo by s_bukley/Bigstock.com

She was the daughter of Virgie (Tabers) and Donald Eugene Hogan. She was married to businessperson, academic, attorney, and government official J. Howard Marshall, until his death. She had a son, Daniel Wayne Smith, with her former husband Billy Smith; and a daughter, model and television personality Dannielynn Birkhead, with photographer Larry Birkhead.

Anna’s paternal grandmother was Helen Marece/Morine Sandlin (the daughter of Morris Sandlin and Callie/Carrie Belle Blizzard). Helen was born in Louisiana. Morris was the son of Simeon Sylvanus/Sylvanis Sandlin and Louisa Mary Huntsman. Callie was the daughter of James Thomas Blizzard and Catulia/Catula/Catular Katie Endsley.

Anna’s maternal grandmother was Paralee Allman (the daughter of Jonas Caleb/Colap Allman and Ada Winchester). Paralee was born in Texas. Jonas was the son of Joseph “Joe” Allman and Margaret/Margarette C. Penrod. Ada was the daughter of L. R. Winchester and Mary.

Genealogy of Anna Nicole Smith (focusing on her father’s side) – https://www.geni.com