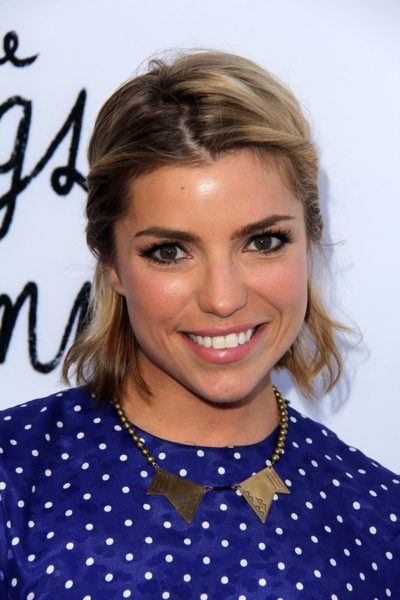 Trimbur in 2013, photo by s_bukley/www.bigstockphoto.com/

Angela Trimbur is an American actress, comedian, and dancer.

Angela’s paternal grandfather was Norman R. Trimbur (the son of Roy F. Trimbur and Florence L. McAllister). Roy was the son of Phillip Trimbur, whose parents were from Alsace, France, and Switzerland, and of Fannie/Fanny Virginia Mayall, whose father was English. Florence was the daughter of William M. McAllister and Lelia F.

Angela’s paternal grandmother was Elaine H. Raslavsky (the daughter of James F. Raslavsky and Eleanor Snyder). Elaine was born in Pennsylvania. James was the son of Michael Raslavsky and Anna, who were born in either Hungary or Slovakia, possibly of Slovak descent.

Angela’s maternal grandmother was Carolyn Patricia Porretta (the daughter of Peter Porretta and Phyllis/Phyllas Arcidiacono). Peter was the son of immigrant parents, who were likely Italian. Phyllis also had Italian ancestry.