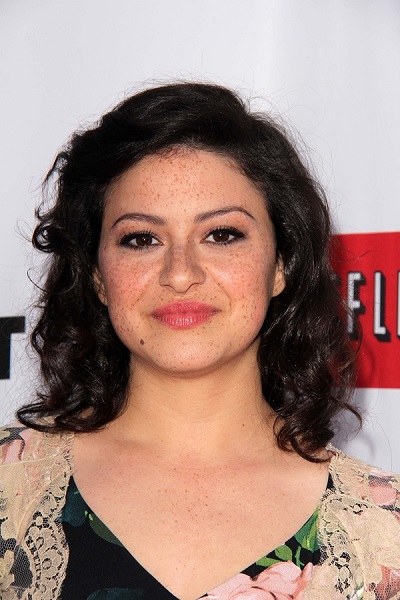 Shawkat in 2013, photo by s_bukley/Bigstock.com

Alia Shawkat is an American actress and artist. Her roles include the films The Final Girls, Green Room, and The To Do List, and the shows Search Party and Drunk History, among many other projects.

Her father was born in Baghdad, Iraq, and is a Muslim. Her mother is of one quarter Irish, one quarter Sicilian/Italian/Arbëreshë, and one half Norwegian, ancestry.

Alia’s father is sometimes described as being of Kurdish background. It is not clear if this is accurate. In interviews, Alia describes her father simply as being of Arab descent (for example, here and here).

Alia’s maternal grandfather was Paul Burke, an actor (Paul Raymond Burke, the son of Martin Joseph Burke and Santa Maria Palermo). Paul was born in Louisiana. Martin was the son of Martin Patrick Burke and Mary Julia Finnerty, who were Irish, from Galway. Santa was the daughter of parents from Italy, Paolo/Paul Proietto Palermo and Nicolina Liuzza. Paolo was Arbëreshë, from Santa Cristina Gela (Arbëresh: Sëndahstina), an Arbëreshë village in the province of Palermo, Sicily. He was the son of Giuseppe Palermo and Giovanna Musacchia.

Genealogy of Alia Shawkat (focusing on her mother’s side) – https://www.geni.com