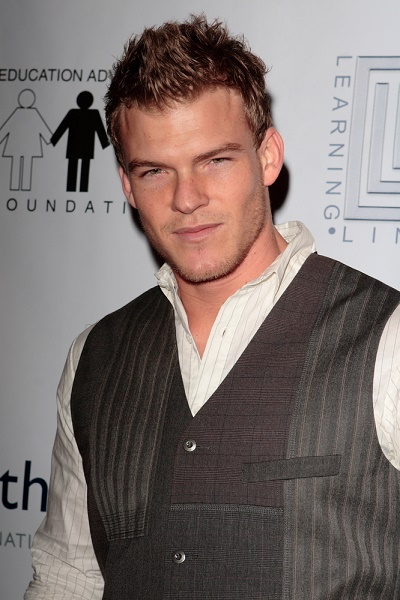 Ritchson in 2009, photo by Prphotos.com

Alan Ritchson is an American actor, model, and singer.

He was raised partly in Rantoul, Illinois and Niceville, Florida. He is married to Catherine Ritchson, with whom he has three children.

Alan’s paternal grandmother was Ella Mae Dyer (the daughter of Lonnie/Lonie Dyer and Dixie King). Ella was born in Ohio. Lonnie was the son of Joseph Dyer and Sarabelle Lawhon. Dixie was the daughter of Andy/Andrew Jackson King and Mary L. Sturgell/Sturgill.

Alan’s maternal grandfather is Robert Eugene Harrell (the son of Adrian Ancil Harrell and Inez Marie Porter). Robert was born in Michigan, to Indiana-born parents. Adrian was the son of Ross D. Harrell and Dessie Pearl Elea. Inez was the daughter of Owen N. Porter and Daisy Ann Meek.

Alan’s maternal grandmother was Barbara Jean Guidos (the daughter of Stephen/Steven Andrew Guidos and Veronica W. Kamick). Barbara was born in Michigan, to Pennsylvania-born parents of Czech origin. Stephen was the son of Alexander Guidos and Maria Hriczisak.

Sources: Genealogy of Alan’s paternal grandfather, Charles Marvin Ritchson (focusing on his own father’s side) – http://worldconnect.rootsweb.ancestry.com