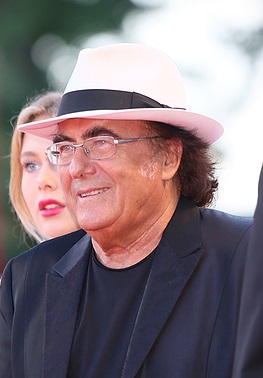 Bano in 2018, photo by Denis Makarenko/www.bigstockphoto.com

Albano Carrisi, known as Al Bano, is an Italian singer, songwriter, actor, and winemaker. He was part of the pop music duo Al Bano and Romina Power, with his former wife, American-born singer and actress Romina Power, the daughter of actor Tyrone Power.

Al is the son of Iolanda Ottino and Carmelo Carrisi. His name is after the country of Albania, where his father fought at the time of his birth, during WWII. Al is also an honorary citizen of Albania.

Al has had four children with Romina; and two children with his partner, entertainer Loredana Lecciso. His daughter with Romina, Ylenia Carrisi, went missing in New Orleans, Louisiana, in 1994.