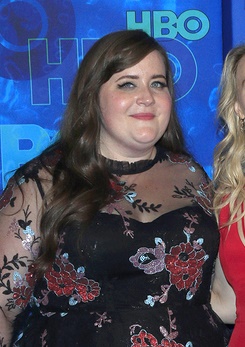 Bryant in 2016, photo by kathclick/Bigstock.com

Aidy Bryant is an American actress and comedian. She was a cast member on the show Saturday Night Live.

Aidy’s paternal grandmother is Patricia Ann Weirick (the daughter of Francis Abram and Clara Catherine Cowan). Patricia was born in Ohio. Clara was the daughter of Thomas Black Cowan and Mary Cecelia Lehew.

Genealogy of Aidy Bryant (focusing on her father’s side) – http://www.genealogy.com