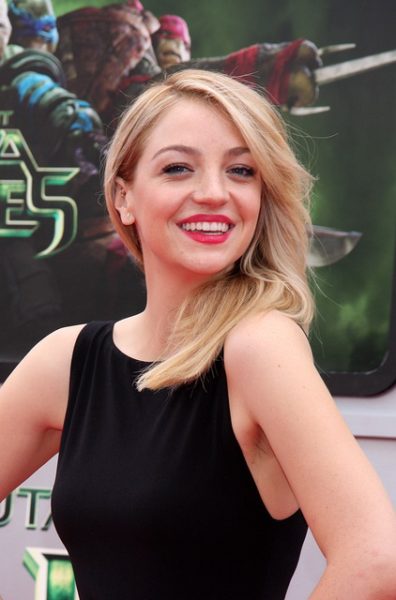 Elliott in 2014, photo by kathclick/Bigstock.com

Abby Elliott is an American actress and comedian. She has starred on the shows Odd Mom Out and Indebted, on SNL, and in the film Clara’s Ghost. She is the daughter of Paula Niedert, a talent coordinator, and actor and comedian Chris Elliott (born Christopher Nash Elliott). Her sister is actress and writer Bridey Elliott. Abby is married to television writer Bill Kennedy, with whom she has a daughter. She was raised in Wilton, Connecticut.

Abby’s paternal grandfather was Bob Elliott (Robert Brackett Elliott, the son of Fred/Frederick Russell Elliott and Gail Marguerite Brackett). Robert was born in Massachusetts, and was an actor and comedian, who was part of the comedic team Bob and Ray. Fred was the son of William Elliott, who was Scottish, and of Alice Augusta Gage. Gail was the daughter of Charles Samuel Brackett and Bertha Ellen Pilley.

Abby’s maternal grandfather was Richard Harvey Niedert (the son of John Henry Niedert and Bertha Dora Christine Kluth). Richard was born in Iowa. John was the son of Henry Conrad Niedert and Louise Christine Pries. Bertha was the daughter of John Kluth and Johanna Nee Rohrsdorf.

Abby’s maternal grandmother was Gladys Margaret Mayer (the daughter of Paul John Mayer and Anna Meyer). Gladys was born in Iowa. Paul was the son of Peter Mayer and Mary Heimer. Anna was the daughter of Peter Joseph Meyer and Adelheid Wolf.

Sources: Genealogy of Abby Elliott (focusing on her father’s side) – https://www.geni.com

Genealogy of Abby’s mother (focusing on her own father’s side) – http://wc.rootsweb.ancestry.com