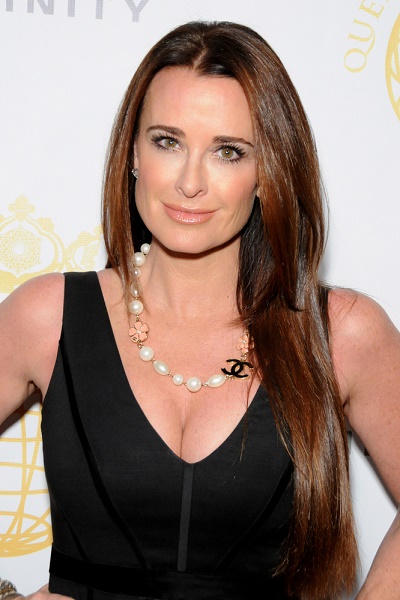 Richards in 2014, photo by Prphotos

Kyle Richards, also known as Kyle Richards Umansky, is an American actress, socialite, television personality, and philanthropist. She has starred on the show Little House on the Prairie and in the films The Car, Eaten Alive!, The Watcher In The Woods, Halloween (1978) and Halloween Kills (2021).

Kyle is the daughter of Kathleen Mary Richards (Dugan) and Kenneth Edwin “Ken” Richards. Her father was born in New Jersey, to Canadian parents. She has Irish, English, and Welsh ancestry. Her sister is actress Kim Richards. She is the aunt of socialites Paris Hilton and Nicky Hilton Rothschild (their mother is Kyle’s half-sister). She was named after professional football player Kyle Rote.

Kyle is married to real estate agent Mauricio Umansky. Mauricio is from a Jewish family, of Ashkenazi and Sephardi descent. He is the son of Mexican television and radio personality Estella Sneider. Kyle is a convert to Modern Orthodox Judaism. She has a daughter with her former husband Guraish Aldjufrie, who is from Indonesia; and three children with Mauricio.

Kyle’s paternal grandfather was The Rev. Kenneth George Richards (the son of John Thomas Richards and Lavina Ann Winsor). The Rev. Kenneth was a Protestant minister. He was born in Tilt Cove, New World Island, Newfoundland and Labrador, Canada. John was the son of Jacob Richards and Elizabeth Morwood. Lavina was the daughter of Solomon Winser/Winsor and Rachel Pollard.

Kyle’s maternal grandmother was Dorothy C./Ann Callahan (the daughter of Francis/Frank John Callahan and Mary Anastasia Dougherty). Dorothy was born in North Dakota. Frank was born in South Dakota, to Irish parents, Cornelius/Neil Callahan and Catherine/Catharine/Katherine “Kate” Finian, who were from County Sligo. Mary was also of Irish descent, the daughter of William Edward Dougherty and Anna “Annie” Kiley.

Genealogy of Kyle Richards (focusing on her mother’s side) – https://www.geni.com